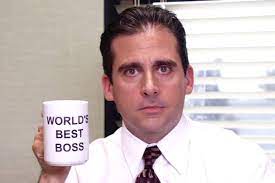 I learned a lot from one of my first bosses. I didn’t realize it at the time. I just thought he was kind of a jerk. I was a teller, trained to follow strict rules. Whenever I couldn’t help a customer, I would firmly explain why not, quoting the inviolate rule. When the unhappy customer appealed to the manager, he scrawled his approval on the check while scoffing, “She wouldn’t cash this?! Well, here you go!”

Guess who the customer brought the now-approved check to, flinging it on the counter with a triumphant smile?

It happened over and over and over. I seethed. I liked to think my anger didn’t show. One day my teller supervisor pulled me aside.

“Why do you keep letting that happen?”

“Me?? It’s him! He shouldn’t keep breaking the rules!”

“You should march right over and tell him that!”

“Are you kidding? He’d be pretty angry! That’s not my job. Someone from downtown should tell him. His boss.”

She handed me the phone. “Call his boss and tell him.”

“Right. You wanna get me fired?”

“OK, then you can’t make him stop. He’s a manager. He gets paid the big bucks to make exceptions to the rules. But you can stop having all the customers come back and fling their checks in your face. Which, by the way, anyone can read like a large-print book.”

“By breaking the rules?”

“By not saying ‘no’.” My large-print book face clearly conveyed my confusion.

“When you say ‘no’, you draw a ‘do not cross’ line. Try saying, ‘I’m sorry, I’m not authorized to cash this check, but perhaps the manager will OK it. Let me ask him.’”

Couldn’t hurt. I gave her idea a try. Coincidentally, I never had another customer come back and throw a check at me.

Since then, I’ve experienced plenty of bosses- the good, the bad, and, well, none of them were ugly, so we’ll stick with the first two. I learned a lot from both, but I would guess that I learned the most from the bad ones- what NOT to do.

Some of the things I learned from both types:

These are just some of the differences between a good and a bad manager. If you believe you’re stuck with one of the bad ones, consider your options. Start positive- many interpersonal issues are the result of misunderstanding, not bad intentions. If you can, schedule some time to talk with your boss. Discuss your shared goals, your workstyles, and seek common ground. If you’ve already tried and been unsuccessful, consider the possibility that you may have very different communication styles, and adjust your own style to achieve better results. Wiley’s DiSC, a personal assessment tool, is a great way to identify and understand your own style, that of others, and how to adjust your communication according to your audience.

If all else fails and leaving is not an option, focus on doing the best job you can, and use the experience to learn how to be the boss you wish you had!