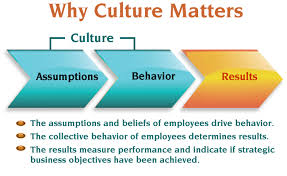 Changing or enhancing a culture starts with recognizing what a culture is, and the clear-eyed understanding that one most certainly already exists. It may or may not be what senior management believes, or that HR describes during onboarding. Culture is the personality of a company, the environment in which employees interact and work. It is implied rather than expressed and tends to develop organically. It’s recognizable in the way people break in new employees- “it’s the way we do things here.” It is the undertow, the current that can exert a strong pull in the opposite direction if the actual culture and the perceived culture are in conflict. In one of my first jobs, my trainer started off by saying, “Forget everything they told you at the main office. I’m going to tell you how we really do things here.”

Before you can embark on culture change you need to understand the current culture. I’m not a big fan of surveys. You shouldn’t have to conduct an anonymous internal survey to determine your company’s climate. You should know what it is by talking and listening uncritically. As Andy Stanley says, “Leaders who don’t listen eventually find themselves surrounded by people who have nothing to say.”

Apply some good old-fashioned face-to-face communication. Get out and talk to people. Listen without judgment. Ensure an environment where people feel they can be honest without fear of retribution. As a consultant, I hear culture through stories- the employees’ story and the executives’ story. The differences often surface in the middle of a class when a skeptical participant challenges me with the question, “do ‘they’ know you’re here??”

As if I’d broken in and was secretly encouraging anarchy.

A specific example of this disconnect involves leadership characteristics that include risk-taking and creativity. Middle managers share stories of unpleasant outcomes when someone took a well-thought-out risk or ventured a new way to do something only to hear “No, we’ve always done it that way!” In spite of the fact that senior management had defined “risk-taking” and “creativity” as critical leadership skills, the managers describe a culture- and the experiences- that actively discourages them.

It’s fair to argue that there is a significant difference between stupid risk-taking and a well-constructed plan, but that was exactly what kind of risk-taking we were talking about- the smart kind. In this case, the bottom line was: what the organization said it wanted in its leaders and what those people actually experienced when they acted accordingly were incompatible. The best training in the world is a waste of time and money if it’s unsupported by the culture the participants will return to.

And it doesn’t change because of some grand announcement or proclamation. “As of today, we will have a new culture! Details to follow!” Good luck with that. You’re just slapping a fresh coat of paint on a shaky foundation.

Start with an informal listening tour. And by “informal, I do not mean focus groups, where everyone sits around and thinks very carefully about what they say, except that one employee that you know will not hold back, nor will he tell you anything new, because he’s said it all before, many times. All he’ll do is drown everyone else out.

You already know what I think of written surveys. They’re just anonymous bitch and/or fawn sessions, depending on how the person completing the surveys feel about at least one of the people in the department.

It will no doubt prove a challenge for some people to trust that honest information won’t lead to retribution, but if you channel your resources well, you should be able to pull it off. Or, if you know a good makeup artist, you could go for the Undercover Boss approach. Ever notice how surprised they are at what they learn “in the trenches?”

Armed with an educated knowledge of your company’s culture, its foundation, you are ready to create or enhance a customer service culture.